The outer ear consists of the pinna and the ear canal (external auditory meatus). The pinna serves as a collector of sound vibrations around us and funnels the vibrations into the ear canal. It assists us in determining the direction and source of sound. 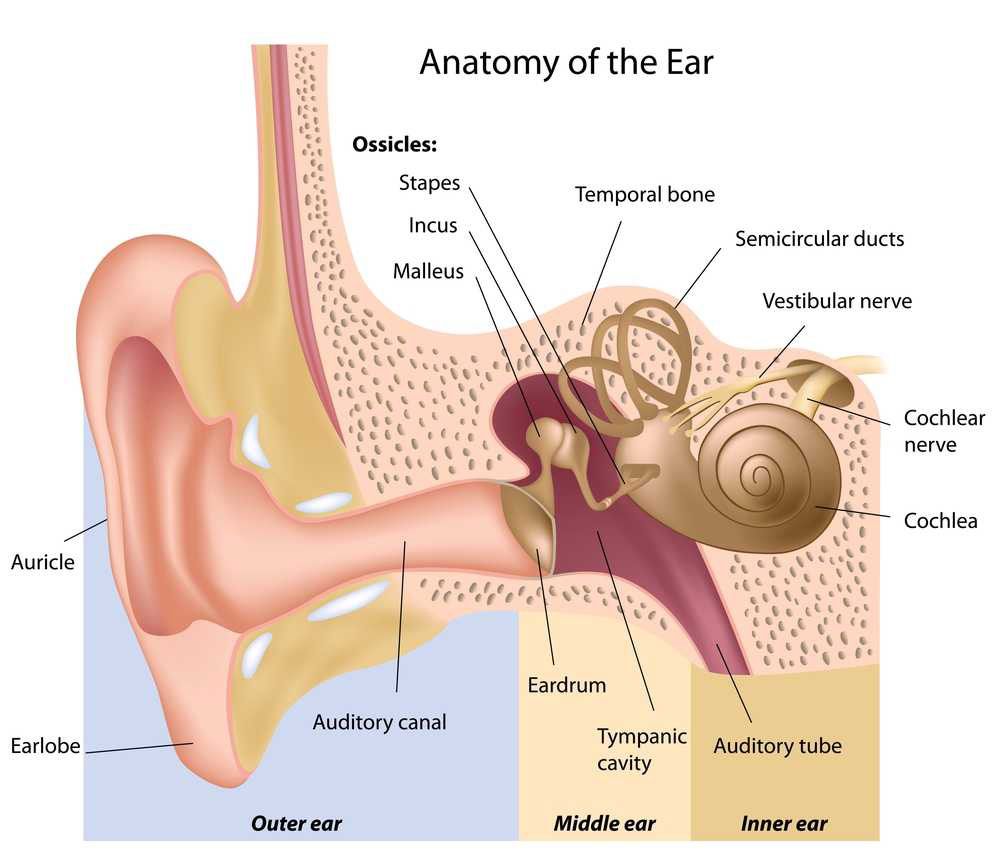 The middle ear begins with the eardrum at the end of the ear canal. The middle ear contains three tiny bones called the ossicles.The first bone, the hammer (malleus), is connected to the eardrum.The hammer connects to the second ossicle, the anvil (incus), and then the anvil connects to the third bone, the stirrup (stapes). These three bones form a connection from the eardrum to the inner ear. As sound waves hit the eardrum, it moves back and forth causing the ossicles to move. Thus the sound wave is changed to a mechanical vibration.

The mechanical energy transmitted through the three bones (ossicular chain) causes the in-and-out movement of the base of the stirrup (stapes footplate) in patterns that match those of the incoming sound waves. The stapes footplate fits into the oval window, the beginning point of the inner ear.

The middle ear is located in the mastoid section of the temporal bone (a skull bone on each side of the head) and is filled with air. A tube called the eustachian tube runs from the front wall of the middle ear down to the back of the nose and throat (the nasopharynx ). This tube provides ventilation and access to outside air and equalizes air pressure on both sides of the eardrum-the middle ear side and the outer ear side. We are aware of the eustachian tube at work when we feel air pressure changing in our ears as we yawn, chew, or swallow.

The cochlea is a bony structure shaped like a snail and which is fluid-filled.The Organ of Corti is the sensory receptor inside the cochlea which holds the hair cells, the nerve receptors for hearing. The mechanical energy from movement of the middle ear bones pushes in a membrane (the oval window) in the cochlea. This force moves the cochlea’s fluids that, in turn, stimulate tiny hair cells. Individual hair cells respond to specific sound frequencies (pitches) so that, depending on the pitch (frequency) of the sound, only certain hair cells are stimulated. Signals from these hair cells are translated into nerve impulses which are then transmitted to the brain.